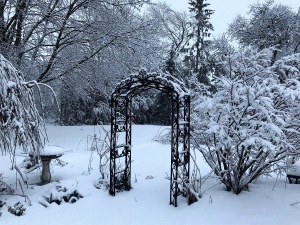 Have you ever noticed how there are some things that are so important at certain stages of our lives yet much less important in others?

This observation came to me when I unpacked a box marked “winter clothes” and discovered a veritable treasure trove of long underwear.

Given the number and variety of styles and fabrics contained in that box, you’d think I was stocking up for the next ice age or potentially planning to design a wardrobe of superhero costumes.

In the ensuing walk down memory lane, I recalled how “long johns”, as we referred to them, were an essential article of clothing in childhood.

Back in school, on winter days when Ottawa lived up to its title as one of the coldest capitals in the world, they offered an extra layer of protection under my clothing during recess.

On winter weekends, whether my family was outside, skating on the Rideau Canal or enjoying the fresh powder on the nearby ski slopes, long johns under my snow pants were an essential for keeping extra warm.

From high school onward, my commute by city bus was the main reason I wore long underwear. One never knew when a bus trip would be cancelled. Whether a bus driver called in sick, a bus got stuck in the snow or a bus broke down from the cold, winter meant moderating one’s expectations of the transit system. Similarly, a traffic accident on a major artery could have a ripple effect of delay on the entire network of buses throughout the city.

When that happened, the wait for the next bus could be a very long and cold one. Long johns under my jeans were my insurance policy to help offset the effects of an unexpectedly long wait in frigid temperatures.

In my high school days, I could still get away with wearing long johns under my jeans and not compromise what little “cool” factor I might have enjoyed at that time. Tuques, scarves and gloves may not have been “cool”, but long johns were my little secret for staying warm.

In university, some classes started as early as 8:30 which allowed me to take rush hour buses that came at greater frequency. But the transportation for mid-day or evening classes wasn’t as plentiful. If I had just missed a bus, the next scheduled trip was 30 minutes later. In those moments, I was beyond grateful for that extra layer of protection from the elements.

For most of my working days, I still commuted by bus as this was the most practical solution for getting to and from the downtown core. Just the same, I had enough experience with winter and our transit system to know that in inclement weather, the show must still go on. Wearing long johns under my business attire was a winter must, just in case.

In later years, my office moved to a location where, in my first three days there, the bus schedules were consistently inconsistent. On top of that, some of the bus rides were standing room only and, to put it delicately, a feast for the senses (and not in a good way!)

I gave up. I was getting too old and worn out for this nonsense. As a result, I signed up for a parking pass. I still wore long johns in winter weather just in case my car ever got stuck or if I got into an accident, given that it could take time in the bitter cold for police and tow trucks to arrive.

Long johns were also a necessity when I took up running and tried extending the season into the winter months. That was when I expanded my collection into fabrics to keep moisture away from the skin and prevent frostbite.

In the pandemic, everything changed. When working from home, the extent of my commuting was from the bedroom to the bathroom to the kitchen to the home office. No long johns were needed.

And now, in retirement, my trips outside of the house are much less frequent. I admit that if I am running errands on a day when the temperature is -10 or less, I will likely be wearing long johns, just as a precaution.

In a recent cold snap, where the garbage still had to be brought to the curb despite a wind chill in the -30 degree range, I did run back into the house to put on some long johns. It was just that cold for the long walk to the curb.

But when you put all of these recent factors together, I do not go through 7 pairs of long underwear per week like I used to.

I find it fascinating how long underwear was an everyday essential for at least 50 winters of my life, yet they get little use today. It’s not that I hold any kind of sentimental attachment, but when you consider the contrast between how something that was once so consistently important is now basically a memory, the difference is striking.

I don’t plan on parting with my long johns any day soon. Sure, they take up room, but given how much they cost, they still hold some potential for practicality. You never know when climate change might deliver a storm of epic proportions, leaving us with limited use of our utilities for staying warm in winter.

Or, in a simpler scenario, if we are ever without a washing machine and it takes months to get a new one (as was the case with our microwave oven in the first year of the pandemic) the long underwear could be part of a laundry contingency plan.

Either way, even if they do not hold the same degree of importance in my life as they used to, I am most grateful for the warmth and comfort that long johns have provided over the years, in helping me expect the unexpected in frosty Canadian weather.