Overcoming My Fear of Pie Crust

For years, I avoided it.

The few times I experienced it were beyond stressful.

When I was forced to switch to a gluten-free diet, it became the impossible dream.

I am referring to pie crust… specifically, making pie crust.

Pie crust was one of those life skills that I just never seemed to pick up.

Back in the pre-gluten-free days, I did give it my best shot on a few occasions trying to make normal pie crust. I would get all the ingredients ready and clear off plenty of counter space for the rolling process. But somewhere along the way, I never really got the feel for it.

These three factors, combined with my uninspiring results, were enough to keep me away for months at a time.

Rolling the dough was the part that challenged every ounce of patience within me.

The dough would stick to the rolling pin, the counter, my utensils and my hands… everything except the pie plate to which it was supposedly destined.

I would try a light sprinkling of flour on the counter and on the rolling pin to prevent the dough from sticking, but by the time I had something resembling a fully rolled out pie shell (if I got to that point at all), it seemed like the entire kitchen was covered in a light dusting of flour.

My pies would not be complete without a side order of anger, anxiety and high blood pressure.

Needless to say, because it was an exercise in frustration that left me feeling defeated, I didn’t practice often.

I never really needed to pursue thrill-seeking sports over the years. For me, just the thought of making pie crust would get the adrenaline pumping for me in the same way that skydiving might for someone else.

One could argue that “practice makes perfect”. As my career got busier over the years, even though “practice pie crust” was a recurring item on my to-do lists, it didn’t get scratched off the list very often. If I was stressed from work, why would I stress myself further at the prospect of perpetuating my failure at making pie crust?

Also, from week to week, when time (or energy) was in short supply, I didn’t have the luxury of being able to experiment in the kitchen. My recipes needed to be a sure thing, to keep the fridge or freezer well-stocked for the week ahead.

That being the case, I just avoided making anything involving a pie crust and just stuck to cookies and squares. The bright side is that I got pretty good at those.

Fast forward to my diagnosis of a wheat intolerance (about 15 years ago). When perusing the shelves of local health food stores, I did try some of the pre-made gluten-free fruit pies and meat pies. I recall some of those early ones were OK, while others had a sandy, gritty texture that had me excusing myself from the table to get some dental floss.

I did try making a gluten-free pie crust in those early years, but the result was even more disastrous than my experience with regular pie crust. A plastic Frisbee would have been more tender and flaky.

In more recent years, the health food store gluten-free pies definitely evolved and advanced. The really good ones were a little pricey, but I indulged from time to time.

It was the convergence of retirement and having an overabundant apple tree that pushed me to give gluten-free pie crust a try again.

By that time, I had already discovered the consistently positive results I experienced with recipes that I tried from America’s Test Kitchen. I already felt hopeful that their recipe for gluten-free pie crust (with its very precise instructions) might be my ticket to pie success.

I admit that the adrenaline was indeed pumping hard as I began, but I set aside plenty of time to go through it, slowly and methodically, following every instruction to the letter. On more than one occasion, I had to remind myself to breathe as I found myself in shallow breathing mode, as the stress of the graveyard of past pies kept surfacing.

But to my great delight, the apple pie turned out perfectly.

I chalked it up to beginner’s luck, but with a positive result comes the confidence to try again!

A couple of weeks later, I decided to try a tourtière, a French-Canadian meat pie, often served at festivities around Christmas and New Year’s. I called my Mom for a refresher on the family recipe for the filling which I would incorporate into a gluten-free crust. 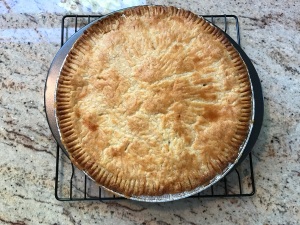 When I set my mind to making it, the adrenaline was pumping even harder as there was not only the pie dough itself to get right, but I could feel the weight of generations of ancestral grandmothers and great grandmothers on my shoulders, making sure I don’t screw up this traditional dish, a symbol of French-Canadian culture for a couple of centuries.

Again, I followed the instructions to the letter, taking my time to remember to breathe and to re-read each word meticulously. The preparation went well. The assembly went well… In the oven it went.

As the familiar scent of Christmas permeated the kitchen, I already had a pretty good feeling about the result. When the top crust started turning a golden brown (like the apple pie did), I was already mentally high-fiving myself.

As luck would have it, it turned out beautifully. My partner and I both enjoyed it, as we did the leftovers.

With two home runs under my belt, I kept going. With the leftover pie dough I made apple turnovers which turned out deliciously. I made another half recipe of pie dough to make a couple of single serving tourtière pot pies (using the meat that was left over from the big tourtière) which turned out great.

Not only can I say I conquered my fear of making pie crust, but I have awoken a curiosity to expand the repertoire into other types of pies, pot pies and pastries.

Fortunately, with retirement, I now have the free time to explore the possibilities and to play in the kitchen.

I plan on practicing more, but I will be staying in my lane, keeping up with the gluten-free pie crust recipe that has worked so well for me.

Will I ever go back to trying to make a conventional (non-gluten-free) one? With the experience and confidence that came with making gluten-free ones, perhaps someday the inspiration, curiosity and courage will be in sufficient supply to want to try normal pie crust again. Time will tell.

Either way, I think I have overcome my fear!

One response to “Overcoming My Fear of Pie Crust”