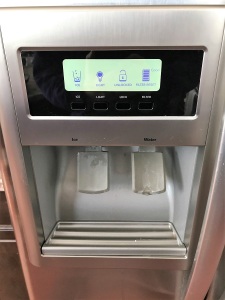 When we first looked at the house, we thought that the water dispenser and ice maker feature of the refrigerator was a really fun touch.

Obviously, we didn’t buy the house on that feature alone, but once the house was ours, we started looking forward to it. Neither of us had a water and ice dispenser before, and always associated such devices to something you’d see in a hotel.

Even though we were well into the lockdown and knew we wouldn’t be inviting anyone over anytime soon, we looked forward to the eventual time when we would be entertaining, and the convenience a filtered water and ice dispenser would be for drink preparation.

When we moved in, unfortunately, it was apparent that we would not be using the feature just yet as the “replace filter” message was displayed on the dispenser. Finding the right filter was added to our growing to-do list. Plus, we were surprised to find the ice maker hardware was sitting in a kitchen cabinet. We weren’t sure why, but given that we already had our hands full with unpacking the contents of our merged households, we parked that task for another day.

A few months later, my partner located the needed water filter online, and much to our delight, it was available through Amazon. A few weeks later, between unpacking, feline demands for attention and office emergencies, I actually had some free time to read the instructions and make some time to replace the water filter.

The instructions suggested that to remove the old cartridge, I needed to pull on the cap covering the filter. Cap? What cap?

Our filter was actually exposed with no decorative cap covering it, which, when properly installed, the decorative cap actually serves as a pull tab to slide the old filter out like a drawer in under two seconds.

Without a cap, I seemingly needed three hands to push the eject button while gently removing the cartridge with two screwdrivers. With all of the strategizing, grunting, pushing, pulling and regrouping it felt like I was recreating a scene from the show “Call the Midwife”.

After about 15 minutes, the old cartridge flew out of its slot with a flourish with a splash of liquid on the floor (again… the midwife imagery came to mind), and the new one clicked into place moments later.

The instructions then advised that 4 gallons of water needed to be flushed through the system before using the water for drinking. This was not exactly a difficult task, just a time consuming one given the slow flow on the water dispenser.

When all was said and done, we were delighted to start using the filtered water dispenser and we retired the pitcher that was occupying so much space in the fridge. We also started hunting for that decorative cap, which was seemingly indispensable to the operation. Fortunately, it was Amazon to the rescue there again.

Just the same, we were still scratching our heads over the ice maker attachment and why wasn’t it in the freezer?

A few weeks later, when the washing machine broke down unexpectedly, during the appliance repair guy’s house call, we showed him the hardware and asked if he knew how to install it. He said he’d try.

To our delight, he was able to install and connect the mechanism. Yay! We were in the ice business.

It was later that night that we understood why someone might have pulled out the mechanism. We were in the living room likely watching a riveting drama when my partner, my cat and I jumped out of our skins when a batch of fresh ice cubes passed from the ice cube maker into the receptacle just above the crushed ice dispenser. It was quite loud, but over time, we got used to it.

From that point on, we thoroughly enjoyed and appreciated our fully functioning ice and water dispenser.

… Until one day when the ice dispenser stopped dispensing. All we were getting was a grinding noise and no ice coming out. In the days that followed, we noticed drip marks from the dispenser to the floor. What was leaking?

To being an investigation, to my great relief, there was a big button on the ice cube receptacle that releases the bucket of ice collected in the fridge door to reveal the guts of the ice crusher. It didn’t take very long to locate the problem: a buildup of ice, large enough to sink the Titanic, had formed.

Fortunately, I had experience in this department. In my very first apartment thirty plus years ago, my refrigerator was a snazzy model from 1962, in a delightful turquoise colour, needing regular defrosting to avoid losing items in the freezer’s blizzard of permafrost.

I put those life skills to good use in combining the ambient room temperature and a little warm water to slowly loosen the ice and to extract it with surgical precision.

After half an hour of slow and steady persistence, it seemed that I had finally reached the right chunk of ice that sent the remaining pieces of iceberg to the floor. After the mop up, I noticed that the ice crusher mechanism and the ice chute were completely unblocked and looking as good as new.

As I stepped away, I marveled at my accomplishment and at having done so without checking out a YouTube video first.

It wasn’t terribly complicated and frankly, any mechanical device that doesn’t involve a computer chip I seem to have a bit of a knack of being able to figure it out. I’ve fixed irons, vacuum cleaners and toasters in the past without any coaching so there isn’t much fear there.

Who knew that ice makers and water dispensers would be next on my résumé of minor home maintenance repairs?

And more recently, in having to clear out the ice chute a second time, I wonder if maybe that is the reason why the previous owners couldn’t be bothered with it.

Either way, for us, we take great joy in this simple pleasure. Not only does it bring back memories of hotel stays and fun vacations, but it represents a convenience to bring a little luxury to our everyday beverages.