Taking the Cat for a Walk 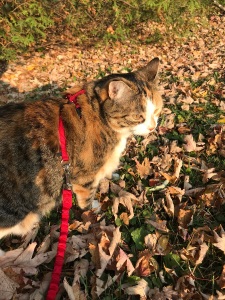 At Ivy the Wonder Cat’s veterinary check-up two years ago, the vet said that she was within an acceptable range for an adult indoor cat, but to ensure that she didn’t take on more weight. At that time, we put in place a few strategies to keep her on track.

Before our move to the country, when things were calm, normal and on a regular routine, her calorie count was pretty consistent without me needing to monitor her intake.

However, there has been so much commotion over the last year between renovations, staging, selling, packing, boarding, relocating, living among boxes, unpacking and more renovations, it was challenging to keep to the structure and certainty that this cat needed to thrive.

Given that she was on the streets for nine months before she was brought to a shelter, it should come as no surprise if this cat eats for survival in times of disruption. So she gained a little.

When the stress of the move had passed and Ivy was feeling more like her usual self, our new vet recommended that we start looking at measures to bring her weight down.

The vet recommended that we moderate and measure her food intake in an effort to reduce her calories, and to switch her to a prescribed food that should make her feel more satiated. Sold!

The part that was a little tricky was the recommendation to play with her more, to give her more exercise. Engaging a six-year-old indoor cat in longer play sessions is easier said than done. I can’t tell you how many times we started playing a game together, only to find myself playing alone when I realized that she had already walked away after approximately 42 seconds.

Over the span of a few weeks, I pulled out every favourite toy that I knew she enjoyed, only to find that she was over it pretty quickly. So much for the exercise part of the program.

At her first weigh-in, she had lost a little, but not at the pace the vet’s assistant would have liked to see. In the second month, the progress was even slower.

If things kept up at this pace, I feared that she would be on a diet forever, wailing by the food bowl.

As an experiment, I decided to try getting her a leash for some supervised walks outside to get in some additional steps.

This wasn’t the first time that a leash crossed my mind. When I was living in the city, on a private lane, with row after row of townhomes closely clustered together, I didn’t want to be seen by the neighbours as that weird guy who walks his cat on a leash.

But here, in the country, we only have one close neighbour, who is absolutely lovely, so I’m less concerned about what people will think. Plus, with an acre and a half to explore, Miss Ivy has a lot of room to stretch her legs.

The pet store clerk was most helpful with tips and hints on how to adjust the leash to be comfortable for Ivy and how to prevent unwanted escapes. She also warned that some designs were less effective and that her cats were able to do a few yoga moves to wiggle out. She steered me to two premium brands in particular that worked well with her cats.

The truth is that my cat is not like one of those cute Instagram costume-wearing cats. She hates wearing anything more than her collar so getting this foreign object on her (and to accept that this was a good thing) took an enormous amount of patience for both of us.

The first one I tried, I had to return after seven walks because it required too much fussing on my part to get the fit just right. Ivy was clearly exasperated and bit me a few times.

The second leash I took home was a home run as it kept its settings for the right fit, rather than needing to be readjusted each time. I just needed to get the leash over her head, clip two straps behind her front legs and pull to adjust the tension.

However, there was homework to be done before taking the cat out for the first time:

Testing the leash indoors: Because Ivy is fast and has been known for her stealth moves, I wanted to be 100% certain that the fit was exactly according to the instructions. I kept making adjustments (indoors) until it looked exactly like the diagram depicted, and we tested walking around the house several times to ensure the straps stayed in place.

Once I was comfortable enough with the initial fitting, we went on a few short test walks outside. I watched the straps very carefully to ensure that they stayed in their prescribed position. One time, I didn’t realize that one leg wasn’t securely in position until we were outside, so I picked her up, brought her back inside and readjusted the straps. Even now, I still keep an eye on the straps to make sure she remains safe and secure with each walk.

The other piece of advice I would offer is to know your garden and to Google each plant in your garden to know which ones could be toxic to cats. For example, we have lilies and lily-of-the-valley in our garden for which even the leaves can be fatal to cats.

For that reason, I keep her away from those completely, and if she ever ends up near them, I tug on the leash when she gets too close. When she doesn’t pay attention, I pick her up and carry her to another part of the property. Over time, she got the idea and stays away from them now.

The best part is that she ended up LOVING going out for walks. On average, she requests two fifteen minute walks per day, but in really nice weather (when I’m not on work duty) she could easily stay outside for up to half an hour, which I enjoy too.

When she has decided that she is done, she marches up to our side door with great determination and meows for me to open the door. It doesn’t get any clearer than that.

Not surprisingly, she doesn’t like going out in the rain. She doesn’t like days when the wind is gusty and howling through the trees. She also hates loud vehicles and will make a run for the house when a big commercial vehicle goes by. On those days, we just go with the flow and if it’s a “stay in” kind of day, so be it.

The walking experiment surpassed my expectations. In the span of a few weeks, she already lost .5 kilos (almost one pound) and is on track to meet her weight loss goals.

The funny part is that now instead of hovering over the food bowl meowing for more food, she is now hovering by the cat gate, meowing, asking to go for more walks.

On the flip side, when the timing is good for me, I just have to wave the red leash and she comes running, knowing that it’s a good time for a walk.

With the certainty that this was part of our new routine, we invested in some tick and flea prevention.

The best part is that it forces me outside, even on busy work days when I might be inclined to hover around the computer. Her desire to go for a walk forces me to take the breaks I might otherwise have skipped, so it’s beneficial for both of us, and an opportunity to spend some quality time together.

Did you enjoy this post? If you haven’t already, please check out the rest of my blog at andrebegin.blog. From there, you can click on the “Follow” button to receive future posts directly in your inbox. Also, don’t be shy, feel free to tell a friend or to share the link.

Have a great day,

5 responses to “Taking the Cat for a Walk”