Moving and Exceeding My Quota of Swear Words 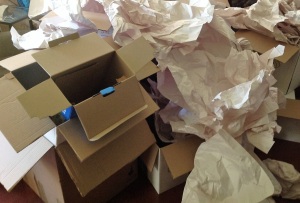 The recent move reminded me of how the stress associated with it can change me from a relaxed, calm, mild-mannered fellow who uses swear words very sparingly, to a sleep-deprived hothead whose foul mouth could have him locked up in a confessional for hours.

Even though I thought that I was pretty well-organized from the very beginning and mindfully committing time consistently to the packing process, the journey still presented its share of unexpected surprises.

When that happened, when combined with the looming deadline of the closing date, anything that required extra time for which I hadn’t budgeted became a trigger for a swear word… or two… or three.
But in the privacy of my own home, with the windows closed, who would know the difference?

Have you ever tried to neatly pack a set of anything, only to discover you are missing one piece? And then you locate the missing piece within five minutes of sealing the box? And then there isn’t enough room in the box when trying to add the piece to keep the set together?

Have you ever packed something with full conviction that you wouldn’t need it until after the move, only to realize you needed it a day or two later? When Mother Nature kept changing her mind and kept returning to frosty temperatures, it was a challenge to try to get the winter gear washed and definitively packed.

During my packing, there were many boxes for which I was mentally high-fiving myself for achieving a perfect Tetris game for my optimal use of space within a box. And then there were the ones that weren’t so perfect that had me persistently attempting to repack the box multiple times. What it is about packing that brings out a streak so competitive that we won’t let ourselves be defeated by a cardboard box?

Then there were the times I was so focused on the Tetris game, with boxes so perfectly packed with a multitude of small articles, but when came time to log the contents of the box in my “packing binder” (to make it easier to find things after the move) I couldn’t remember half of what I put in the box.

And then of course, there were moments when I misplaced the “packing binder” itself which always sent me into a bit of a tizzy searching for it through the four corners of the house.

And when it comes to losing things, what is it about losing the end of the roll of transparent packing tape that requires deep meditative exercises to restore inner calm or else risk ruining the entire roll in trying to get it in use again?

A point of frustration along the way was the fact that even though I was finding some gently-used belongings I was ready to part with, there was no opportunity to do that due to the Covid-19 restrictions. Nobody was taking back used goods. So whether I liked it or not (…not!), I had to bring those items with me.

The day we got the keys to the new place, we went in to clean, a few days before the movers brought our stuff. As a warm, humid day was forecasted, we turned on the central air, not really giving it a second thought until we started noticing that we were both dripping with sweat and the thermostat reading was going up, not down. Let’s just say it’s a good thing we hadn’t set up a “swear jar” that day. Fortunately, outdoor temperatures dropped the next day and we already had an appointment to have it checked out a few days later, which turned out to be a relatively minor repair.

In trying to leave the house in better condition than when I took possession of it, I did my best to deep clean the house as I went along, and I thought I did pretty well. In theory, when the movers had loaded up the truck and the house was empty, it should have been a “touch-up” cleaning. Also, by that point, Ivy the Wonder Cat had already been at her cat hotel for several days… so why was I still finding dust bunnies and tumbleweeds of cat hair?

For someone who naturally gravitates to order, structure and consistency, the moving process was a reminder that in life we need to expect the unexpected. There are so many variables in the moving process that I don’t think it is realistic to expect a flawless and stress-free move.

I think that the best we can hope for is that we have successfully managed the parts of the move that we can, to try to minimize stress where we can, and then let the chips fall where they may for the parts over which we really don’t have any control.

But what is it about the moving process that makes it so highly concentrated with variables?

One response to “Moving and Exceeding My Quota of Swear Words”