The Final Cut: From Clippers to Shaver 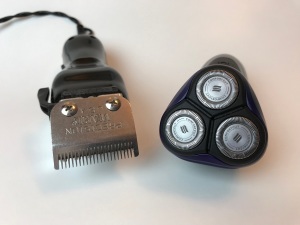 It was on the eve of my 54th birthday, facing the next instalment in my every-two-weeks haircut when I asked myself, “Why not? If I don’t like it, it will grow back.”

I explored electric razors with the plan to shave my scalp for the first time. But when I say “first time”, the reality is that the transition to this point has been more than a decade in the making.

When I accepted that my hair was slowly slipping away due to male pattern baldness, rather than finding creative ways of covering up my slowly increasing Friar Tuck look, I started the slow transition of shorter haircuts.

My last attempt at long hair that ended up looking like Peppermint Patty was trimmed to a neat professional look. For a while after that, I took a bit of a detour into a faux-hawk look, which I consider my last actual “hair style”.

But when more scalp was peeking through the back of my head, to me, it was time. In every subsequent scissor cut, I went a little shorter every time. After that, it was the clipper cut countdown, starting with a “number four” with much trepidation.

The nervousness quickly disappeared through my immense enjoyment of the freedom from hair products and blow dryers, and in the reclaiming of time in the morning. The fact that a visit to the barber was now an efficient and record-breaking 7 minutes in duration was a pleasure in itself.

I held on to that look for a while, enjoying the compliments that came with it and in the acceptance that this was a sharp look for a “mature” guy in his mid-40’s.

Somewhere along the way, I bought my own clippers and started alternating between a visit to the barber and doing it myself, to save a few bucks. The only problem with doing it myself was the contortion routine I had to do on the bathroom counter, while flipping my glasses on and off, looking through mirrors to ensure I got everything and didn’t leave any patches of uncut hair.

My inner circle of friends and co-workers will attest to my visits to their cubicles on the next business day, doing quick spins and asking “I just cut my hair, did I get it all?”

After the number one clipper cut, I wasn’t sure where we went next until one of my barbers proposed a “zero point five”, which is basically a buzz cut with the clipper blades extended out but no guide on the front. Once I tried it, there was no going back and this is where I remained for a few years.

Throughout the gradual transition, no one in my inner circle really noticed and it was no real shock to anyone’s system (least of all, mine). It was only folks who hadn’t seen me in a few years for whom the change may have been more noticeable.

But the drive to go one step farther came from the admission that arthritis was starting to get in the way. As much as I loved my set of clippers, they were heavy.

And holding heavy, vibrating clippers for several minutes at a specific angle, going over every nook and cranny of my scalp, while balancing myself on the bathroom vanity isn’t easy when one’s joints aren’t performing at their peak. One slip could have accidentally turned into a scene from a slasher flick.

When the time came to explore options, I found myself at the department store one Saturday morning, in front of the massive wall of shaving, clipping and grooming devices. I got to work reading the various boxes, one-by-one.

By lunch time, I had memorized each feature and price point of every make and model, and had convinced myself that a lightweight electric shaver was definitely worth a shot. Not only would a shaver keep my dome neatly groomed, but my aging joints wouldn’t be stressed. At the same time, with hair that short, I could potentially avoid the runway spin routine to ask if I missed a spot.

It seemed pretty straightforward, I just needed to turn the shaver on, and run it along my scalp in a circular motion until it stopped making the little gobbling sounds, indicating that the haircut has been completed. Easy, right? So I bought a lightweight, rechargeable shaver at a nice price, zipped right home and began the transition to my new look.

When I was done and I looked at myself in the mirror, there was no huge surprise given the minimal difference between a “zero point five” cut and the shaver cut. The only thing was that I could see more craters and pits, sort of like the moon’s surface. Maybe if this writing gig doesn’t work out I might have a future working at a planetarium.

I hopped in the shower for a quick wash and rinse to rid myself of loose hairs that could come back to irritate later.

When I started to towel off, I encountered a fascinating first… the towel got stuck on my scalp. The stubble on my scalp made it feel like one half of a Velcro fastener.

I assume the terry cloth of the towel was the “loop” part of Velcro to my scalp’s role as the “hook” part of the Velcro. It was a very bizarre feeling to have a gravity-defying towel stuck to my head, but an adjustment I was happy to make.

The next day when I went for a run, the same thing happened when I had to peel off the running cap from my head as it remained stuck on the stubble (as opposed to just sliding off when I had a little bit of hair up there).

Bright side: a gust of wind will never blow a hat off my head ever again!

As I ran my hand over my head and felt the scratchy stubble, for a moment I wondered if it might be worth trying to return the sander I bought a few weeks prior, but the prospect of scalp splinters helped me reason to stay with the sander status quo.

After this experiment, I knew that this would be the way to go and that shaving my scalp weekly was the next step for a mature guy in his mid-50’s.

That is, until a few days later when I went for my physical. When my doctor was checking my ears he stepped away and asked “Did you just get your hair cut?” to which I replied, “Yes”.

The doctor smiled and said, “Behind your ears… I think your barber forgot a spot.”

One response to “The Final Cut: From Clippers to Shaver”