Could Rejected Passages Tell a Story of Their Own? 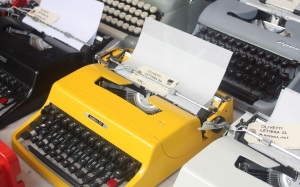 When I see original drafts of sheet music for iconic songs selling for millions of dollars at auction, or scraps of paper written by legendary authors or historical figures as artifacts in a museum, I wonder: would anyone be interested in the drafts leading to my own completed works? Should I be saving my drafts?

As a humble little blogger and aspiring author, I know it would be like a lottery win to achieve rock star status in the literary world. I have no plans or aspirations to that effect. As long as I am able to write, I am happy. If readers enjoy my work along the way, that is a huge bonus which makes me so very grateful.

I was just going through my shredding pile, watching page after page of blog drafts get ground up into confetti. While on the one hand, I applaud myself for not letting clutter accumulate, on the other, I can’t help but ask if this might be “the one” that might change the world.

Could this possibly be the blog post that journals will be quoting?

Could this be the blog post that English teachers will be dissecting for students for generations to come?

Could this be the blog post that will generate discussion and debate among scholars?

Could this be the one for which its original drafts would be a treasured artifact, long after I have written my last word?

Could the ideas scribbled on the back of a crumpled grocery list be the subject of speculation and interpretation, centuries from now?

Who knows when a blogger’s writings from 2016 might be holding the missing puzzle piece for someone centuries from now, to truly understand what society was thinking and doing at this point in time. (Funny enough, sometimes I ask myself the same question, even though I’m living in the here and now.)

But for that big “what if”, should I be hanging on to my previous drafts? Might the evolution of a given work be as revealing in itself than the final product? Might the rejected passages tell a valuable story of their own?

The reality is that previous drafts are getting increasingly rare for me, as I seem to have transitioned to mostly writing first drafts on the computer, rather than on paper. True enough, I could not live without my journals and scratch paper for writing quick notes to get transcribed later. But the possibility of tracing the evolution of one idea through its rewrites fades when I just hit the save button over and over.

On the one hand, that increasing scarcity is a good argument in favour of saving previous versions. On the other, I can’t imagine renting storage space to preserve a mountain of old drafts.
Hmm… what to do?

With that decided, I fed the next sheet into the shredder, and started worrying less about the downstream societal impacts of destroying this one sheet of paper.