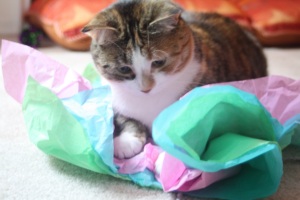 When Ivy the Wonder Cat first joined me a year ago, I admit that I got a little carried away on buying cat toys. Manufacturers sure know how to pull on the heartstrings of pet owners with every possible combination and permutation of interesting, fun and cute. There are many brilliant ideas out there!

I would take home the new toy, with the best of intentions and highest of hopes, only to find her more interested in the packaging, or going into my work bag and getting a good sniff of my lunch container. But sometimes, when I look away or leave the room, something clicks and it becomes a new favourite… or not.

And of course each cat is different. A favourite toy for one can get virtually ignored by another. And the big hit today, might not get a second look a few months from now, no matter how much catnip gets sprinkled on it.

Just the same, Miss Ivy does have a few favourites among the commercially produced toys that did turn out to be excellent value for money.

But what surprised me most over the past year was the discovery that simple, inexpensive items around the house, can become favourite items in her toy box. These items can be quickly replaced, refreshed and rotated through to engage her in fun play.

When combined with a few relatively inexpensive commercially available products, Ivy’s toy box is very affordable and offers her the stimulation she needs for the active, extroverted kitty she is.
Here they are, Ivy’s top 10 cat toys (at the moment):

10. Paper bags
I don’t know why she does not have an affinity for cardboard boxes as many cats do, but cut the bottom out of a liquor store paper bag and she is ready to move in. Ivy is all class! This is one of her favourite hiding spots when playing hunting games to creep up on the “prey”. 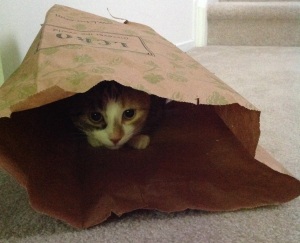 9. The juice bottle lid
This came as a huge surprise one day as I dropped the plastic lid from a bottle of cranberry juice on the kitchen floor. Before I had a chance to pick it up, she had run behind me and started slapping it around with her paws with the finesse of a skilled NHL hockey player. Who knew? I left it there on the kitchen floor, just to see what would happen. In the still of the night, I sometimes hear slap shots and bank shots throughout the hallway and kitchen, thinking, “Oh my poor walls”, but happy that she is enjoying her own feline version of “Hockey Night in Canada”. Even as I am writing this, the puck is in play!

Just be sure that the lid is big enough to not pose a choking hazard. 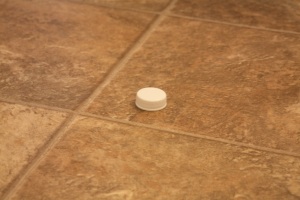 8. Paper towel and toilet paper cardboard tubes
I don’t know what it is about rolling these things down the staircase that keeps her mesmerized, but the cascading waterfall effect is sure to offer minutes of fun.

7. Playing ball… sort of
Ivy’s version of playing ball is running after the very soft, bouncy little foam balls on the right (like Nerf balls) as they bounce down a staircase. Similarly, if I throw them back up the 7 stairs, she merrily gallops up the stairs to follow them as well. I don’t quite get the attraction, but if it keeps her happy, I will happily play along. She also loves chasing the ball with the bell and the crinkly ball, as they roll down the stairs. Gravity is our friend!

6. Laser pointer
Ivy has found the little red dot irresistible, which makes a great toy when I’m a little tired and see that she needs to burn off a little excess energy. I just need to stand somewhere and make that little dot run, twirl and dive through the room or up and down the stairs, and Ivy suddenly becomes a gold-medal contender in track. I reward her with a couple of treats and lots of love and positive reinforcement for being such a good hunter but I think the jig may be up soon maybe because the red dot is never “catchable”. That being the case, I may need to put this one on the back burner for a while or just use it sparingly.

If you play with a laser pointer, be very careful never to point it in direction of the cat’s eyes.

5. Little toys containing catnip
I find it interesting that Ivy is somewhat selective with her catnip toys, certain ones I can leave on the floor and she will return to them again and again, while others she won’t touch unless I bring them to her attention. Either way, when she likes one, it’s a thing of beauty to see her go, licking it, biting it, swatting it around, playing hacky sack with it or beating it with her back paws.

4. Yarn
Not too long ago, I was wandering through Wal-Mart and spotted this skein of yarn on clearance for a couple of bucks. I remembered that yarn is a traditional cat thing, so I thought “What have I got to lose?” What a steal of a deal!

I cut off a piece that is about 12 feet long, I hold on to one end and walk around the house. She will chase after the piece trailing behind me for a good 10 minutes at a time. What impresses me most is that if we play this game a few days in a row, rather than just chasing the end trailing behind me, she starts figuring things out and starts stomping on the yarn at the halfway mark or the 2/3 mark, seemingly getting proactive and strategic! Smart kitty!
P.S.: I always put the yarn away after a play session, just to be safe.

3. Yarn under a blanket
A recent discovery is taking the same 12 foot strand of yarn mentioned above, and running it under a blanket. Ivy sees something moving under the blanket and stomps on it repeatedly to stop it from moving. It’s pretty funny for me, but seems like an exciting activity for her!

2. Tissue Paper
From the day I got her, Ivy’s favourite toy is tissue paper. Even though she doesn’t have a destructive streak when it comes to my own stuff she loves plowing through a stack of tissue paper, pushing it to the opposite side of the room, making crinkling and rustling noises with it and having a rip roaring time! Plus, I found that if I place a toy with a bell, or a catnip toy under 3-4 sheets of tissue paper, she will dig through the paper to find it and extract it. After a few games, the tissue paper is put in the recycling bin and I put new paper out. She has not tired of it yet!

1. Yarn and Tissue Paper
Similar to the “Yarn under the blanket” idea, when I pull strands of yarn under tissue paper, she goes wild! If I place the yarn in the shape of an X, layer the tissue paper on top, then slowly pull on the exposed pieces of yarn, she stomps and chases after the bits as they suddenly hide under the tissue paper.

What about your cats? What ordinary household items have become your cats’ favourite toys?