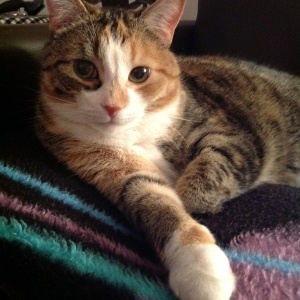 This past year brought the arrival of Ivy the Wondercat into my life and whether I was aware of it or not, in becoming a first time pet owner I would also get my first taste at parenting. Also, whether I knew it or not, I was probably destined to take after one parent more than the other in terms of parenting style.

The first few months I think we can disregard as unrepresentative, as both Ivy and I were all over the map. Ivy was just getting used to her new fur-ever home and her new life as an indoor cat after being a stray, living a hard life on the streets for 9 months.

In return, I was overthinking and reading too much into her every action, and interrogating my friends and colleagues wondering if any slight misstep were potential signs of behavioural problems. Thank heavens for good friends to point out the obvious: that she was a cat, curious about her new surroundings, and just adjusting to her new life.

Just the same, whenever Ivy would jump on counters or the dining room table, I thought action was required on my part or else risk being stuck for 20 years with a cat with bad habits. I tried products and tricks to try to keep her off the counters including aluminum foil, a drop or two of lemon juice, shaking a can of coins. Nothing that would hurt her of course, but just to act as a deterrent. Yet she seemed relentless.

One day, she jumped on the dining room table while I was busy doing dishes. Without really thinking about it, I just slowly walked up to her on the dining room table, gently stroked behind her ears and sweetly asked, “What is it Sweetie? Is something wrong?” She immediately jumped off the table, ran downstairs and sat down by her little exercise ball. It ran out of kibble. Once I added more kibble to the ball, she was fine. That is all it took.

The next time she was up on a kitchen counter, I did the same thing and in asking her sweetly “What’s wrong? Show me.” She led me to her downstairs food bowl that was licked clean just shortly after I filled it… which made sense because she did not eat much of her breakfast that day. That was easy to fix.

I asked myself, can we actually be communicating? What a breakthrough!

Getting up on counters was not an act of defiance on Ivy’s part, she was just acting like a light on a car’s dashboard. She was just trying to get my attention when something in her world wasn’t quite right. And in almost every case, she was right. Of course in some cases, it just means, “Daddy I have some energy to burn because I have been napping all day while you’d been working. Can we play?” a very easy request to fulfill, especially when her play sessions last 5 to 10 minutes and then she’s off to do something else on her own.

From that point on, when she started doing that, I would run through the mental checklist of Ivy’s needs: food, water, scooped litter, sleep, toys, and time with her human. If the balance is a little off on one of those, I would see if a little more attention to the missing element does the trick. If not, then I do the “Show me” routine.

Going with the flow and “talking it out” became the foundation of our relationship. Shortly thereafter, I also noticed that the inflection, tone, strength, duration in her vast repertoire of meows can actually be decoded… and I can work with that.

Today, I can’t remember the last time I used any kind of deterrent or even raised my voice with Ivy. She doesn’t really need any of that. She’s a fantastic cat through and through that just needs to be heard from time to time. When I do, she responds wonderfully.

Getting up on the kitchen counters or dining room table is a rare occurrence now and when she does, it is usually with justification and a sign that I missed something on the list.

Looking back, if I had to say whose parenting style I ended up taking after, the gentle approach involving listening and negotiation is much more my natural inclination… and just like Mom!
Thank you for your legacy in parenting skills Mom! Happy Mother’s Day!