Cash, Prizes and Other Fun Hobbies 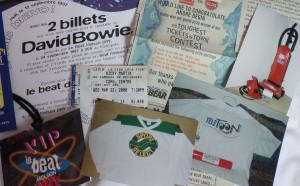 Through the years, I would have been considered a casual contest participant, throwing in a ballot here and there much like everyone does. And over those years, my efforts paid off modestly in the form of occasional free movie tickets, record albums and the odd free t-shirt (and some of the shirts I won back in that “novelty t-shirt” period were indeed odd).

However, in 1995, my luck changed. With a little free time on my hands, I started entering contests more frequently and with a little persistence and patience, my efforts paid off. I won one contest, then another, and another… The prizes started rolling in from radio contests, mail-in sweepstakes, in-store sweepstakes and raffles, to the point that I had to make room in my apartment for some of the free stuff. In addition, my social calendar was filling quickly as I was winning tickets to sporting events, concerts, movie premieres, special one-time-only events, and free restaurant meals.

Since I was single for much of this period, I needed to maintain an easy-to-access list of friends’ phone numbers (and their “understudies”) in order to quickly call them up when I was notified of event tickets that I had won, often requiring a quick decision as to whether they could make it or not. It got to a point that some friends had to turn down Gold Circle seats to a hockey game, because at one point, my lucky streak was so strong that we had just gone to a game and they understandably could not be away from home, their wife and the kids… again! I will admit that there were days that I really needed my skip-a-day formula antiperspirant as I was quite stressed in trying to find someone to join me in the events on very short notice.

Amid my winning streak, I also got the thrill of a few free trips. I brought my Mom to New York City on Mother’s Day 1997, courtesy of a contest win. In 2000, I won an all-expense paid trip to the NHL All-Star game in Toronto (courtesy of McDonald’s and The Ottawa Sun). This will probably go down in the history books as one of the most memorable contest prizes, just for the fact that my guest and I were treated like VIPs throughout a weekend that revolved entirely around hockey, a Canadian bachelor’s dream!

In retrospect, to be good at contests, one prerequisite that helped was being an optimist. As long as you had an ounce of hope and a positive attitude, anything was possible and you never knew when your name might get drawn. When I would tell people of an event I just attended or a prize I just received, courtesy of a contest win, some would respond “Oh, I never win those things”, when in fact they rarely ever entered.

Given my steady winning streak and respectable track record, in 2000-2001, I put pen to paper and wrote a complete first draft (79,000 words!) of a book describing all my tips, hints and strategies. Unfortunately, in the time it took for the 7 rejection letters to come back from the publishers to whom I sent the book proposal, the contest landscape had already changed.

Where my strength was in previously having the time to drive to stores and drop off ballots in person, a luxury of time that not many people had, the move to web-based contests leveled the playing field. My book of tips and hints became stale very quickly as Internet-based contests took off and pretty much anyone with a few minutes here and there, could participate in contests without ever leaving their home. That being the case, competition became fierce and my winning streak dried up completely.

Also, it is a very different time now, in this day and age where the reality of buying and selling personal information can be a bit scary. When we don’t know what a company or agency will do with our information, if anyone wants to know more than my name, email address and phone number, I will read EVERY WORD of the rules, regulations and privacy policy with my skeptical glasses on. Plus, back in the day, I was always selective, choosing to enter contests hosted by stores and companies I knew well. On the Internet, I am not always sure who I am dealing with. For that reason, it takes a different type of effort now than it took during my winning streak and frankly, today, rather than spending time on contests, I would rather be writing.

All told, my lifetime record is more than 120 contest wins, totaling over $17,000 in cash and prizes… pretty much the same as a good Showcase on the Price Is Right!

In the time I was actively taking part in contests, I had a lot of fun. The quality time I was able to spend with family, friends and colleagues while attending those events together is the source of many fond memories and stories, and for that I will always be very grateful.

The other blessing in the contest experience is the fact that it spurred me into sitting down and actually stringing 79,000 words together and writing my first book. The fact that it will probably never see the light of day is irrelevant. It just served as a life lesson to me that sitting down and writing a book is possible. I did it once and can surely do it again with a little discipline, a lot of heart and a lot of passion.

Did you enjoy this post? If you did, please know that there are plenty more where that came from! If you haven’t already, you can check out the rest of my blog at andrebegin.net. From there, you can click on the “Follow” button to receive future posts directly in your inbox.

Also, don’t be shy, feel free to tell a friend or to share the link.

Have a great day,
André

One response to “Cash, Prizes and Other Fun Hobbies”