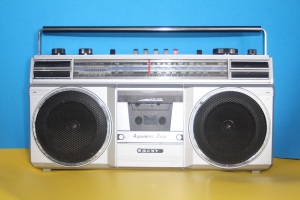 In late September, I had the good fortune of attending the Jann Arden concert at the National Arts Centre in Ottawa. Not only is Jann’s concert an evening of superlative music, but between songs, Jann charms the audience with her hysterically funny stories. I hope she never puts her musical career on hold, but if she ever does, she could easily have a brilliant future as a stand up comedienne!

In one of her stories, she tells of how the Columbia House Record Club was responsible for exposing her to such a diverse range of music in her formative years as a musical artist, an opportunity she might not have otherwise found growing up in rural Springbank, Alberta.

As she told the story, I could not help but draw a parallel to my own musical education which I owe almost entirely to MuchMusic (and its French-speaking sister station, MusiquePlus), back when they were “The Nation’s Music Station”, airing music videos “24 hours a day, in stereo”.

Today’s reality of YouTube, Vevo, iTunes and video on demand is a dream come true, allowing viewers to see the songs they want, when they want, where they want, whether tablets, phone screens, computer screens or big screens. While I sometimes wish that we had that option back in the 1980’s and 1990’s, I still think that the streaming video model is a lost treasure.

What was phenomenal about “Much” was the richness of the information that the Video Jockeys (VJs) consistently delivered when they introduced music videos, which helped viewers get to know the bands and their music. Also, whenever bands happened to be passing through Toronto and they stopped into Much for a visit, viewers would be treated to an interview and an opportunity to get to know the recording artists on a more personal level. In having MuchMusic in the background as I crammed for university exams or worked on masterpiece essays, I received a huge education in my spare time in music, history, geography, the recording industry, broadcasting, marketing, art, culture and pop culture.

Some might call it a downside, but in watching MuchMusic in the early days, not only did we see our favourite music videos but we also had a cornucopia of other songs we had to sit through in order to get to those favourites. That was the “free gift with purchase”, bonus educational component: patience and gratitude!

Even though I may not be great with names now, after hours of watching MuchMusic videos back then I still have names of bands, their members, album titles and sometimes their producers’ names stuck in my head as well as knowledge of their solo or spin-off projects, collaborations and guest appearances.

It truly was a musical education that I believe would be difficult to replicate in the “on demand” realm unless one had immense free time and an insatiable curiosity. Back when “Rock and Roll Jeopardy” aired on the Game Show Network, I swear I was outscoring the players time and time again, and that was thanks to MuchMusic… and my immense free time in the 1980’s and 1990’s.

As much as I was fixated on artists and bands like Duran Duran, Cyndi Lauper, David Bowie, a-Ha, Madonna, Depeche Mode, Eurythmics, Prince, Tina Turner and Bryan Adams (to name a few), having MuchMusic as the consistent soundtrack to my university years, in my “man-cave”, in my mother’s basement, I was able to learn about many bands I might not have known otherwise if left entirely to my own devices. I believe that having the continuous rotation of music from all kinds of artists, of all kinds of genres, helped me develop musical appreciation and become the all-around music lover I am today.

When MuchMusic started airing programming that shifted away from the 24-hour streaming music video format, I think we lost sight of the spin-off benefits, the opportunity to get to know a wider range of artists, including emerging bands just trying to get their name out and find a fan base.

I recognize that the Internet and that the availability of “on demand” has completely changed the musical landscape and that MuchMusic had to adapt to that reality. Would streaming videos still work today, it is hard to say when waiting for your favourite band’s video had seemingly gone out of fashion. If it still works for radio, why wouldn’t it for video?

In either case, I would like to send heartfelt thanks to MuchMusic and its entire crew over the years. I also would like to extend warm wishes in commemoration of their recent 30th anniversary! Great job everyone! …If only you knew how many hours MuchMusic was on in my house! Cheers!

Do you remember MuchMusic shows like The MuchMusic Spotlight, Hostess Sneak Previews, Coca Cola Countdown, Backtrax, MuchWest, The Power Hour, City Limits, Soul in the City, Rock Flash and Outlaws and Heroes? Do you remember some of the earlier VJs like J.D. Roberts, Christopher Ward, Jeanne Beker, Michael Williams, Erica Ehm and Steve Anthony? What are some of your favourite MuchMusic memories?

3 responses to “My (Much)Music Education”