When Food is Flying 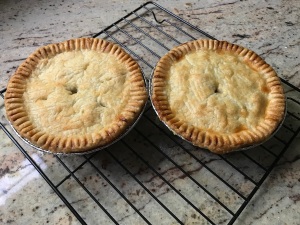 Back in my working days, I used to think of myself as the king of batch cooking. On any given weekend, I would roll up my sleeves and slice, dice, chop, fry, bake, roast or braise any number of food items in preparation for the work week ahead.

I would place the completed meals into small microwave-safe containers, label them and then freeze them. It often felt like cooking for a platoon, preparing two or three recipes at the same time and ending up with 12 to 15 prepared meals, but it worked for me. As a result, during the work week, I barely had to think about lunches and dinners. To me, it was a pretty efficient system for cooking for one.

During those marathon sessions of cooking, I picked up the habit of cleaning the kitchen as I went along to avoid a mountain of dishes and a bad case of “kitchen claustrophobia”. Just the same, when food prep day was done, I could do one final kitchen clean up and then toss whatever I was wearing into the laundry hamper.

The reality is that despite my meticulousness when cooking and cleaning up, I often ended up wearing some of my ingredients. Call me an enthusiastic chef!

After moving to the country with my partner, I quickly adapted to cooking for two, as we took turns in meal preparation. END_OF_DOCUMENT_TOKEN_TO_BE_REPLACED

Immediately upon receiving my second Covid-19 vaccination a few days ago, I looked forward to putting this chapter behind us and getting back to a life that is closer to the normal we once knew.

One thing I won’t miss about this lengthy chapter is the “pandemic pee planning”.

During the lockdowns, even though I was following rules to the letter and only leaving the house for essential groceries and necessary appointments, trying to manage my bladder around the limited number of public restrooms that were open to the public during that time added a whole logistical challenge in itself.

After a lifetime of being sold on the merits of proper hydration and drinking eight glasses of water daily, you can see where a potential problem ensues.

In a pre-pandemic world, if I was called to a three hour meeting, if a “health break” wasn’t on the agenda, I knew I would have to excuse myself at least once to make it through to the end or else I’d be wriggling around in my chair, crossing my legs like a pretzel.

As a younger employee, I stressed a lot about it as I did not want to appear disrespectful by walking out in the middle of a meeting. As much as I held great admiration for people who could hold their bladders for three hours, I had to admit and accept that I wasn’t one of them. As I got older and more confident, I worried less about it (which only seemed to make potential urgency worse) and was resigned to the fact that, “when you gotta go, you gotta go.”

But it is amazing how the ability to use a public restroom when you need it (or even a little proactively) was something we took for granted. END_OF_DOCUMENT_TOKEN_TO_BE_REPLACED

How I Organized My Kitchen on a Budget 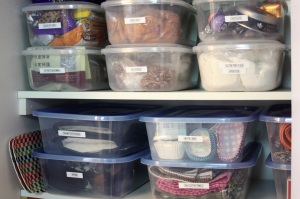 “A place for everything and everything in its place” was the advice I was given as a child when I misplaced something, which I have to admit was often enough.

But whenever I had a chance to put things in order and to give things a designated spot (and I made sure to return the objects to their designated spot after use), it seemed that losing, misplacing and hunting for things became a rare occurrence. Mom and Dad’s advice was proven right, again and again.

I was working in the kitchen a few days ago when I realized that my kitchen was not following that mantra. I had teas scattered in three different cupboards. I had bags of bulk store products piled on top of one another and sliding off each other. Even my cat’s cupboard was becoming an avalanche-waiting-to-happen.

My spring cleaning instinct went into overdrive. It was time to tame these cupboards and get the kitchen organized once and for all!

It’s not like I’ve never done this before. A few years ago, I containerized the different kinds of gluten-free flour I needed, just to keep them clearly identified and organized. Gluten-free recipes were a breeze when I could tell my tapioca starch from the potato starch, and the white rice flour from the sweet rice flour. Every time I baked or brought back more flour from the store, I was so thankful that I had this section so neatly organized.

It was time to apply the same makeover technique to the rest of the kitchen. END_OF_DOCUMENT_TOKEN_TO_BE_REPLACED

Filed under food, How to

We hear men boasting about the size of theirs all the time and how bigger is better. We also hear from some women who say it is not really the size that matters, but it’s more about the quality of the experience that counts.

Of course I am referring to… televisions.

About 3 years ago, I called one of those junk disposal services to come over and haul away my 27 inch tube-style TV. The beast, as I called it, was still a perfectly good TV but was not keeping up with technology that was going digital and HD. Watching HD programs on an old standard TV was like watching shows from another planet as it never fully filled out the screen and would sometimes go wonky on me. Sometimes the image was zoomed in, sometimes it was zoomed out. It made me dizzy. It was time to step it up… technologically speaking.

Let’s not forget as well the beast of a stand it took to support a TV of that weight. The two guys from the junk disposal service were grunting pretty hard as they were dragging it out.
The shiny new TV I bought to replace it was a 40 inch flat screen LED smart TV, weighing considerably less. The new TV was actually more awkward to carry than it was heavy, but still, bringing it and its stand home was a one-man job which I handled easily enough. I felt like Superman carrying a 40 inch TV over the threshold, all on my own.

Given the size and layout of my living room, 40 inches was plenty big to view from any seat in the room, from any angle, even with the eyesight of an almost quinquagenarian.

At that time, of course, there were larger televisions out there, but 40 inches was probably on the cusp between medium and large size at that time. In any case, I have never regretted that choice.

Even though that was just 3 years ago, if you walk into any television dealer, the 40 inch TVs are looking puny when compared to other TVs seemingly up to twice their size now.

The next question is why? END_OF_DOCUMENT_TOKEN_TO_BE_REPLACED

My Obsession With Lists

The road of life is littered with my lists… To-do lists, shopping lists, wish lists, bucket list, lists of books I want to read, lists of songs I want to buy on iTunes, lists of topics I want to cover in my blog, lists of wine I have tried and liked (…because after a good glass of wine I can barely remember my own name, let alone the name of a winery, its country and variety). The lists can take multiple forms: electronic lists on my iPhone, scrap paper, post-it notes, index cards, napkins, special “list” pads, toilet paper, whatever is closest when the inspiration strikes.

I am often tempted to make a master list of all the lists I have but that just seems extreme… so I keep several of them in a “steno” note book.

Maybe I am a bit ambitious in my own tasking or maybe it is because I don’t have the retention powers of others, but I find that keeping lists helps me to stay organized, focused and on top of everything I need and aspire to do. In addition it can be great for multi-tasking because at a glance, one can pick out seemingly compatible or complementary tasks and can double, triple or quadruple the things accomplished in one strong effort. END_OF_DOCUMENT_TOKEN_TO_BE_REPLACED