Over the years, I haven’t been one to shy away from dressing up for Halloween (… or any other day of the year, when the occasion called for it). I have always found it to be a lot of fun to step out of character for a day and take on another persona for the pure fun it.

Over the course of a half-century, I have had plenty of opportunities to try on different costumes. What surprises me is that the ones that seem to be the most memorable were not necessarily the store-bought ones, but the ones that involved an injection of creativity to complete the look.

Here are a few of my favourites:

The most memorable store-bought costume had to be my favourite cartoon character, Bugs Bunny. Because I wasn’t in growth spurts around that time, I am pretty sure I wore it for (at least) two consecutive Halloweens.

It was pretty simple really, a grey polyester jumpsuit with a white chest and belly that I could hop in and out of in seconds, and a plastic mask with a little elastic in the back that needed a little reinforcing for the second year.

Add a carrot, fresh from our garden, with the stems still on and I was as happy as a clam. It really was a simple pleasure.

Inspired from an episode of “All in the Family” where Mike and Gloria were dressed up as Groucho and Harpo Marx, Mom helped me make a home-made Groucho Marx outfit. For the costume, she raided my parents’ closet for a white shirt, jacket and pants that would appear baggy on me, and then drew on a moustache and bushy eyebrows. Combined with plastic glasses and a plastic cigar from my toy box, and a repertoire of horrible jokes, it was an easy yet effective home-made costume that was a lot of fun. END_OF_DOCUMENT_TOKEN_TO_BE_REPLACED

How I Became a New Opera Fan 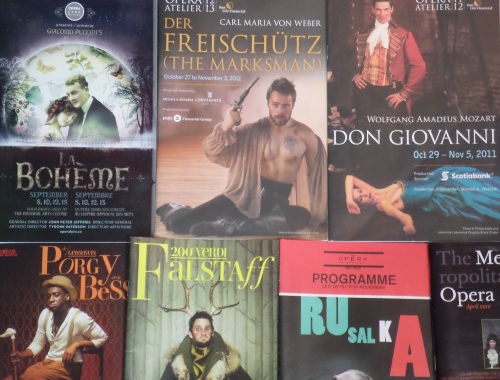 When my partner John and I met for our very first date, it was clear that we clicked given the easy flow of the conversation around the many interests we had in common. Both of us were huge fans of music, theatre, art, television and movies, among others. However, one area where we were at different places in life, was our appreciation of opera.

John had a clear passion for the art form, while I had never really explored it before. He explained that if I was open to it, opera was really a natural next step, if I already liked music and theatre as much as I did.

As far as I knew, up to that point, my most recent (yet limited) opera experience was Sweden’s pop music competition, Melodifestivalen, in which the song selected to represent Sweden at Eurovision 2009 was “La Voix” composed by Fredrik Kempe, co-written with and performed by Malena Ernman. It was a fun song that blended pop, dance and opera for a very unique and memorable tune. For me, the song’s chorus, sung in opera style to a disco-ish beat, was a great appetizer for the journey ahead.

But when it came to opera, initially, I had a number of apprehensions:

How will I “get it” if they are singing in a foreign language?
Much like foreign movies, in North America, operas are sub-titled, even when you attend in person.

Aren’t operas long?
On average, operas can last three to four hours but there are intermissions (sometimes two). (NOTE: For your first time, you might avoid operas by Wagner that could keep you there for 6 hours).

Won’t it be a stuffy, pretentious event? Will I have to get dressed up?
To go to an opera, you can get dressed up but overall, in Canada, opera does not have to be a black tie affair. People dress smartly for the event. As for pretentious, I’m sure you will find pretentious people at any event, not just at opera. Think about opera much like you would an art gallery or museum. People who attend are fans of the art form. END_OF_DOCUMENT_TOKEN_TO_BE_REPLACED