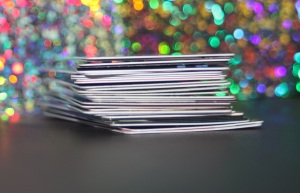 In 2016, I published a blog post about the number of loyalty cards I was carrying and the challenge in keeping track of all of them. There had to be an easier way.

I still maintain that with impeccable client service and reasonable prices, we could probably skip loyalty programs.

But marketing wizards seem to have tapped into our basic human need to belong, and have turned clubs and memberships into an art form that seems to fill a void. Sometimes the exclusive rewards and personal offers are so well thought out that we overlook the consumer information that we have volunteered about ourselves to get to those benefits.

Shortly after that post appeared, I figured I had nothing to lose in trying to keep track of all of them with the smart phone apps that they were offering.

Initially, the issue I encountered was that my antiquity of a phone was sometimes too slow to produce the apps as soon as I needed them. To proceed with the experiment, I had to wait until my phone was retired and replaced.

When I bought a new phone, I jumped on the bandwagon in a big way and signed up for all of the apps to replace the imposing stack of loyalty cards I had accumulated.

My next task was to learn how to juggle products like a circus performer, while waiting in line to check out. I wanted to avoid the huffing, puffing and sighing from the shoppers behind me, as we all waited for an app to launch.

I became pretty good at holding different products under my armpits, between my legs, or in my teeth while needing both hands to swipe my way to the right app at the right time. I’m sure that there is some funny security footage out there to attest to my newly found skills. END_OF_DOCUMENT_TOKEN_TO_BE_REPLACED

Where Have All the TV Theme Songs Gone?

This season, the American television network “The CW” launched a reboot of the favourite 1980’s prime time soap “Dynasty”. In watching the very first episode, I was delighted to see several nods to its original series, including having kept its great orchestral theme song. The only thing was that it was a much shorter version of it.

Similarly, Netflix has recently rebooted “Queer Eye for the Straight Guy.” Again, a really unique theme song, but chopped down to just a few bars of its original.

Have you noticed how the opening themes for many American TV shows have gotten shorter and shorter over the years? Now, some shows don’t even have them at all.

If I mentioned the names of program like “All in the Family“, “Golden Girls”, “Three’s Company”, “The Brady Bunch” or “Gilligan’s Island”, even if you weren’t a huge fan, I’m sure many of you would be able to recite a few words if not the whole theme song.

These theme songs became deeply entrenched in our pop culture, and some have become synonymous with the decades when the shows originally aired. In doing so, they also became entrenched in our hearts and minds.

What would have become of “The Mary Tyler Moore Show” with a theme song about a messy breakup instead of the inspiring words about making it after all? END_OF_DOCUMENT_TOKEN_TO_BE_REPLACED