Over the years, I haven’t been one to shy away from dressing up for Halloween (… or any other day of the year, when the occasion called for it). I have always found it to be a lot of fun to step out of character for a day and take on another persona for the pure fun it.

Over the course of a half-century, I have had plenty of opportunities to try on different costumes. What surprises me is that the ones that seem to be the most memorable were not necessarily the store-bought ones, but the ones that involved an injection of creativity to complete the look.

Here are a few of my favourites:

The most memorable store-bought costume had to be my favourite cartoon character, Bugs Bunny. Because I wasn’t in growth spurts around that time, I am pretty sure I wore it for (at least) two consecutive Halloweens.

It was pretty simple really, a grey polyester jumpsuit with a white chest and belly that I could hop in and out of in seconds, and a plastic mask with a little elastic in the back that needed a little reinforcing for the second year.

Add a carrot, fresh from our garden, with the stems still on and I was as happy as a clam. It really was a simple pleasure.

Inspired from an episode of “All in the Family” where Mike and Gloria were dressed up as Groucho and Harpo Marx, Mom helped me make a home-made Groucho Marx outfit. For the costume, she raided my parents’ closet for a white shirt, jacket and pants that would appear baggy on me, and then drew on a moustache and bushy eyebrows. Combined with plastic glasses and a plastic cigar from my toy box, and a repertoire of horrible jokes, it was an easy yet effective home-made costume that was a lot of fun. 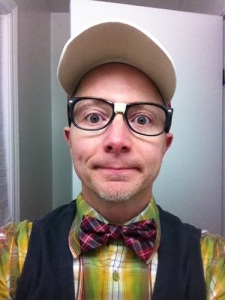 On two occasions (and about 25 years apart) for “Grease” themed get-togethers, I always thought the festivities would be incomplete without an appearance by nerdy Eugene. Even though I have always thought of myself as a bit of a snappy dresser, it surprised me that I didn’t have to look too hard to find the right wardrobe pieces to make the look work. Hmm… is the universe telling me something? Anyway, the tape on the glasses was a must to bring the look together.

Having just seen a stage presentation of Dracula in Montreal, I thought that a Dracula costume might be a versatile thing to have on hand. With different accessories, not only could I be the Prince of Darkness, but I could also be Prince Charming. So I found a Dracula costume in the Sears catalogue, ordered it and instantly loved it. The moment I tried it on, my confidence doubled and I felt fearless (… except for garlic).

I loved the big heavy black cape, but after scooping up a pile of leaves into the lining as well as stepping on it a few times and nearly strangling myself, I decided to bring it to my tailor to get it adjusted to a more manageable size for future wearings.

Just the same, walking back to my car after a party, with the cape billowing in the breeze like a scene out of a movie, it was a moment I will remember forever!

A couple of years after Dracula, a Sesame Street theme party came up. I could repurpose all of the elements of the Dracula costume and instead of pasty white make-up, I opted for a purple eyeshadow, patiently applied all over my face until I had even coverage, gradually transforming me into the Count (ah-ah-ah!)

My addiction to TV came out one year when I used my crafting and artistic skills to turn a cardboard box into a full-size console TV, complete with woodgrain cabinet. With a hole at the top for my head, smaller holes on either side for my arms, and the bottom completely cut out for ease of walking motion, at the time, I thought it was a stroke of creative genius. I remember spending many evenings on the intricate details for the screen, the antennae as well as the channel and volume knobs. In some ways, I wish I had a picture of it, but in others, I am almost glad I don’t as I fear it could have been pretty bad too.

While working at Boots Drug Stores in my university years, I remember one Halloween in particular when the entire sales staff dressed up for Halloween. We had a blast! My costume that year was a modern-day devil, which was put together with a black shirt, black suit, red tie, spiked up hair (back when I had sufficient hair to spike up) and some very red blush, patiently applied all over my face until I had even coverage (the precursor make-up technique for The Count costume in #6 above). I really appreciated the employee discount that day as it took several applications and reapplications of blush. My friend Karen took care of the expert finishing touches, drawing on a fine moustache and some black eyeliner to make the eyes and eyebrows pop.

The added twist to the costume was a tail, peeking out from under my jacket, made from a coat hanger, covered by toilet paper, covered by a roll of red streamers. It was pretty effective except that throughout the workday it kept unravelling.

One of my friends was downsizing in preparation for an exciting new life half way around the world and offered up a few items for sale. His Superman costume has a no-brainer.

I was delighted that it fit so well, and my abs never looked better!

Do you think I can wear this under my work clothes? 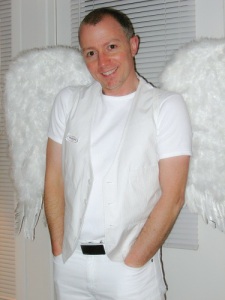 Inspired from a scene at the 2:15 mark of Magnus Carlsson’s video “Live Forever” (as well as the “Albert” character from the Kraft Philadelphia Cream Cheese commercials) I thought that an angel costume would be a fun look and easy to put together. All I needed was a white shirt, jeans, belt, socks, shoes and vest (I had all of the above on-hand)… and a pair of wings. The latter was easy to find at my nearest Halloween store.

Frankly, I really had fun in this outfit and I would wear it again. The only pitfall is those darn wings that were a bit of a menace in crowded rooms, and kept getting caught in doorways and bannisters!

My most favourite costume had to be the Batman costume that my Mom made by hand. Ever since I was a kid, watching the 1960’s Batman series in reruns, that was my dream costume. I remember she based her design on a pattern she picked up at the sewing notions store, and from there, she let her inspiration and creativity soar. I still marvel at the thought of the cowl, that must have been pretty intricate to make from fabric, but all of the pieces, including the cape, were very brilliantly interpreted and executed.

Much like with the Dracula costume, the moment I put it on, my confidence got a huge boost at a time in my life when I needed it. Being “the new kid” after changing schools was not an easy adjustment for me.

I wore the Batman costume very proudly for a couple of school parties and likely my last couple of rounds of trick or treating.

To this day, that costume holds the fondest memories and greatest sentimental attachment. The fact that Mom took some of her precious energy and time making a costume by hand was reason enough to appreciate it, but the fact that it was the right costume at the right time that brought me much joy and empowerment, even for a day, made it that much more special!

From the bottom of my heart, thanks Mom! Luv ya!

Did you enjoy this post? If you did, please know that there are plenty more where that came from! If you haven’t already, you can check out the rest of my blog at andrebegin.blog. From there, you can click on the “Follow” button to receive future posts directly in your inbox.
Also, don’t be shy, feel free to tell a friend or to share the link.
Sincere thanks for reading!
Have a great day,
André